Soon after a state appellate court lifted an injunction Monday against Michigan’s law banning most abortions, another Michigan judge granted Gov. Gretchen Whitmer’s request for a restraining order against the enforcement of the law.

The law, whose current form dates back to 1931, criminalizes abortion except when necessary to save the life of the mother. The law generally has not been enforced since the U.S. Supreme Court’s 1973 Roe v. Wade decision.

On Monday, a Michigan Court of Appeals ruling, overturning a controversial preliminary injunction issued by a state claims court judge in May, said that county prosecutors have the authority to defend and enforce the state’s abortion law.

But later that same day, Michigan Circuit Judge James Cunningham granted a new injunction against the law saying there was a “threat of immediate and irreparable injury to the people of the state of Michigan.”

Whitmer, the Democratic governor, had sought the injunction. She said there was a “lack of legal clarity” about the abortion law and argued that the Michigan Supreme Court should take up her lawsuit challenging the law. She said the injunction “will help ensure that Michigan’s doctors, nurses, and health care systems can continue caring for their patients.”

The move drew criticism from pro-life groups including Michigan Right to Life.

“Michigan’s abortion law has been on the books since 1846, supported by Michigan voters in 1972, upheld by the Michigan Supreme Court and subsequent courts, (and) used as recently as 2019 in a successful prosecution,” Michigan Right to Life said in an Aug. 1 tweet. “Until changed by voters or the legislature, there should be no legal question here.”

Whitmer is a staunch backer of abortion. In September 2021, she used a line-item veto to remove from the state budget about $16 million worth of funding for alternatives to abortion. In July, she vetoed a $2 million tax credit for adoptive parents and a $10 million marketing program to promote adoption as an abortion alternative, the Detroit Free Press reports.

Her lawsuit named as defendants the prosecutors in 13 Michigan counties with abortion clinics. The seven Democratic prosecutors have agreed not to enforce the law, while the six remaining prosecuting attorneys are Republicans.

Critics of the lawsuit include Michigan Catholic Conference policy advocate Rebecca Mastee, who said in April, “The right to life for unborn children and its inherent value given by our Creator cannot be reduced to a legal opinion or legislative vote.”

Abortion advocacy groups in the state have launched a ballot initiative to override the 1931 law by way of a constitutional amendment.

Court of Claims Judge Elizabeth Gleicher issued the preliminary injunction against the enforcement of the law on May 17. “After 50 years of legal abortion in Michigan,” she said, “there can be no doubt that the right of personal autonomy and bodily integrity enjoyed by our citizens includes the right of a woman, in consultation with her physician, to terminate a pregnancy.”

Gleicher said the right to an abortion is almost certainly guaranteed under the state constitution’s due process provisions that protect bodily integrity.

Critics, including the Michigan Republican Party, had said the judge should have recused herself from the case. They noted that Gleicher is a donor to Planned Parenthood, was honored by Planned Parenthood, and previously represented Planned Parenthood as a volunteer lawyer with the American Civil Liberties Union in a failed challenge to precedent upholding the state abortion law.

Attorneys with the Alliance Defending Freedom legal group and the Great Lakes Justice Center filed a legal challenge against the claims court injunction on behalf of two county prosecutors and two organizations: Right to Life of Michigan and the Michigan Catholic Conference. The complaint asked the appellate court to take control of the case and order the lower court to dismiss the case, arguing that the lower court had drastically exceeded its jurisdiction.

“Michigan’s elected officials have a duty to uphold and defend the law, and protect the lives of the unborn,” Denise Harle, senior counsel at Alliance Defending Freedom and director of the ADF Center for Life, said Monday.

The appellate court said the preliminary injunction never applied to county prosecutors, as the claims court had asserted.

Harle called the appellate court “a major step forward in allowing the county prosecutors to do their job and enforce the state law that protects children and mothers, even if the attorney general refuses to do so.” 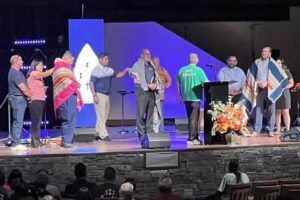